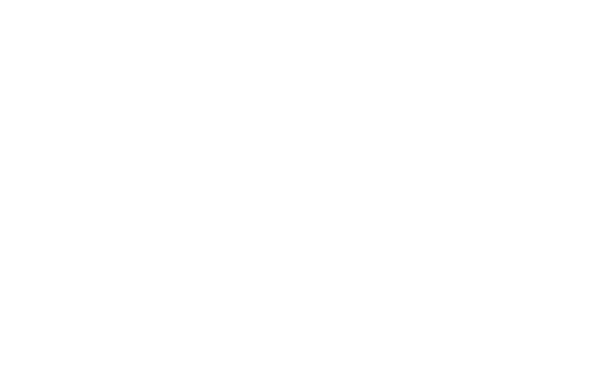 For a Thanksgiving blog, I happily yield to my wife who, as a social worker in Chicago, learned a lasting lesson about gratitude and giving.

When the alarm went off at 7:00 a.m. that dreary Chicago morning, I had to fight the temptation to roll over and ignore it. I could hear the rain coming down in sheets outside. But my senior citizens’ program provided a free breakfast for needy seniors, so I got dressed and headed toward my assignment at LaSalle Street Church.

On Sundays a contingent of homeless and street people joined our regular group of neighborhood residents. We welcomed all who came, and for some our breakfast was the best meal they’d have all week. The heavy rain must have deterred some seniors that day, because only about 50, instead of our usual 60 or 70, showed up for breakfast.

I had been cooking Sunday breakfast for four years, long enough for the magical glow of “doing something good for the needy” to have faded. Rainy days presented additional problems. Soaking wet, the street people smelled even worse than usual and tramped mud on the floor, which upset the neighborhood seniors. 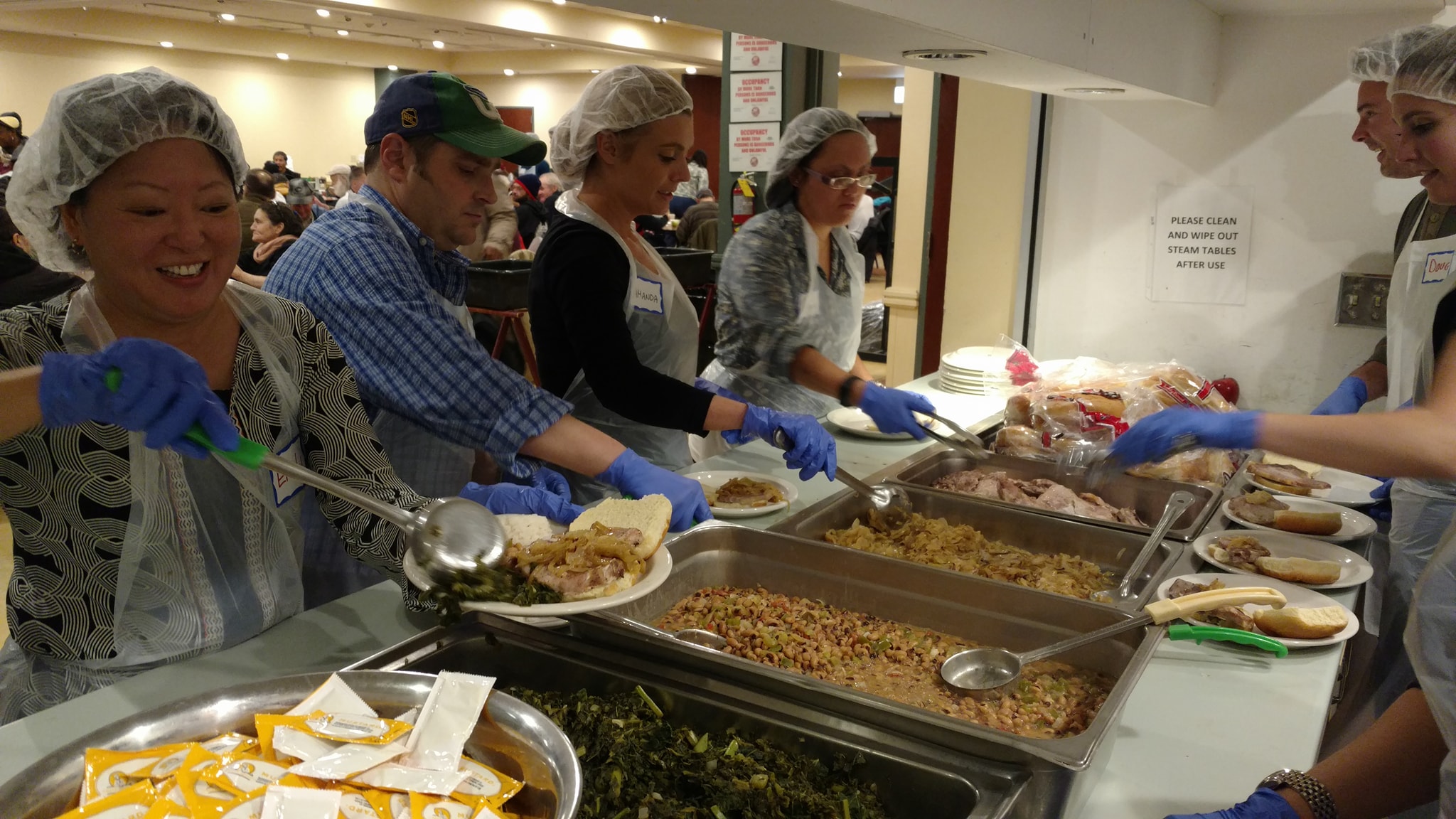 Within a few minutes, other volunteers from the church arrived to lend a hand in the cooking process. We had 100 eggs to crack, 50 muffins to butter, gallons of coffee to make, and silverware and plates to set out. The cramped kitchen soon came alive with the clatter of dishes and the enticing smells of breakfast. Buoyed by the volunteers’ enthusiasm, I felt my morning depression begin to fade.

Right at our busiest moment, however, someone called my name. “Janet, someone out here wants to see you. Says he needs help.”

That was the last thing I wanted to hear. As a social worker I heard that line at least once a day. Street people stopped by the church office to ask for help, spinning fantastic tales of hardship and bad luck. When I checked out their stories, I found that very few held up. Sadly, I learned that most were really after money for alcohol.

I wiped my hands on my apron and went out to meet the new arrival. He was a slender African American, slight and stooped, with hair just beginning to turn gray. He wore neat, though well-worn clothes, and held a hat in his hands. As he spoke in a very soft voice, he looked down toward the floor rather than directly at me.

“My name’s Charles,” he said. “I’ve been driving up and down Chicago streets looking for a church that’s open this early,” he said. “Yours was the only one with a light on. I wonder if we could talk.” 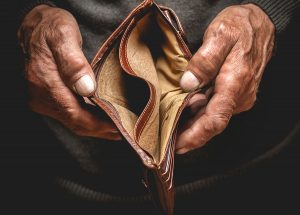 Charles didn’t show the typical signs of shiftiness. He seemed sincere, and humble. After a glance toward the kitchen to check the crew’s progress, I steered Charles to a hallway out of the traffic pattern, and nodded for him to go ahead.

He had come from Madison, Wisconsin, he said. He had no job, and lived on a public assistance check.  His wife had been committed to a mental institution, so he was trying to raise his four children alone. He had driven to Chicago to visit a diabetic sister, hospitalized for a leg amputation.

“To tell you the truth,” he said hesitantly, “I need some gas money. I thought I had enough, but then my car broke down.” He had found a junkyard and bought a used starter, which he installed himself, using up his money.

Charles glanced at the food piled high on the kitchen counter. “Maybe you can’t help me with the gas,” he said. “But I’m worried about my kids. We been sleepin’ in the car, and they haven’t eaten in a few days. Do you think there’d be enough food left over to give them a bite?”

My skepticism melted as he talked. Charles’s story was far less preposterous than most, and even his body language seemed trustworthy. I had taken this job to help people with true needs, and something told me I had met one in Charles.

“Sure—we have a smaller crowd today, and plenty of food,” I told him. “Bring your children in. You’re welcome here.” 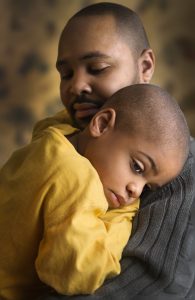 The seniors fell silent and watched as Charles brought his children. First he carried in a three year old, wrapped in his dad’s heavy coat. Then a five year old, likewise carried in his arms. The older two, seven and nine, trailed behind, looking around wide-eyed at the room full of senior citizens. Despite the cold weather outside, all wore short-sleeve shirts, and were shoeless.

I asked the seniors if they would make room for some visitors. They seemed to brighten up at the prospect of children joining them. “You just sit right here and make yourself at home,” said Bertha, a 75-year-old black woman, as she pulled the three year old onto her lap.

The children sat quietly and seemed extremely shy—until food appeared. Even before we served the hot plates, seniors were already offering them bananas and muffins smeared with jam. In the next few minutes, those five visitors ate enough eggs and ham and muffins to feed the Chicago Bears. 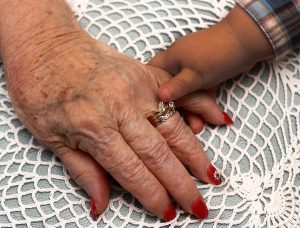 I was dashing in and out of the kitchen, carrying platters of food, yet I could sense a different atmosphere settling in, like a change of weather. Many seniors had started the day grouchy, just as I had. Soon the room was filled with the hum of conversation, and the musical sounds of laughter.

“We ought to invite some children every Sunday morning!” one of the volunteers said to me. She was right; their presence transformed the mood. Older women fussed over the kids’ clothes and hair. Some of the gruffest of the men entertained them with coin tricks. Instead of hoarding extra food, the seniors collected leftovers to pack in a lunch bag for the visitors’ trip back home.

It dawned on me that most of our regulars, tucked away in “senior housing,” had little or no contact with children. They were coming alive, taking to the youngsters like—well, like grandparents.

Prayer time centered on Charles and his family. And then I asked the seniors if they wanted to help out. Could we donate that morning’s offering toward their journey back to Madison? They nodded an enthusiastic yes.

Each week we set out a blue saucer on each table, and the seniors deposited their nickels and dimes and quarters to help with breakfast. The offering averaged about seven dollars. Occasionally, I heard reports that a few seniors, pretending to make change, took out more than they put in. 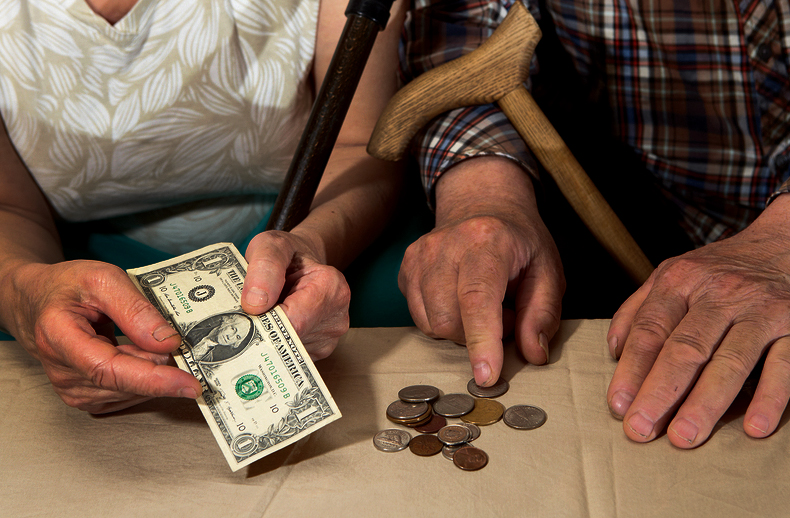 Not that morning. Wang, the mostly-blind Chinese man renowned for his stinginess, dug around in his pocket for an extra quarter. Gertie, a toughened spinster, fumbled in her purse for a dollar bill. The morning devotional speaker slipped me a ten-dollar bill for Charles and his kids. Two kitchen volunteers contributed five dollars. When all the money got pooled together, we counted more than forty dollars for our drop-in guests. I took the money to Charles in a plastic Baggie. “What you don’t use for gas is yours to keep,” I told him.

Charles couldn’t keep still any longer. He asked to say a few words to the group. Unaccustomed to public speaking, he gripped the back of a chair fiercely as he spoke. “I just want you to know you’re beautiful people…and I appreciate this…and just know that my kids and I thank you very very much.” He ran out of words and sat down, and I didn’t see a dry eye in the entire church basement.

When a battered old station wagon finally pulled away from the church, it passed through a line of senior citizens, waving and calling goodbyes to a middle-aged man and four grinning children.

An hour later I sat in the sanctuary at the morning worship service. I tried to concentrate, but my mind kept flashing back to the scene downstairs at senior breakfast. What had happened on that cold, drizzly Sunday morning?

Normally, I had to act as a kind of police force. I watched for the street people who stuffed extra packets of sugar in their pockets and sneaked Styrofoam cups inside their coats. I warned my kitchen volunteers not to leave anything unattended, as some of them had lost umbrellas, jackets, or purses. I even patrolled the restrooms to make sure paper towels and toilet paper rolls were not stolen. 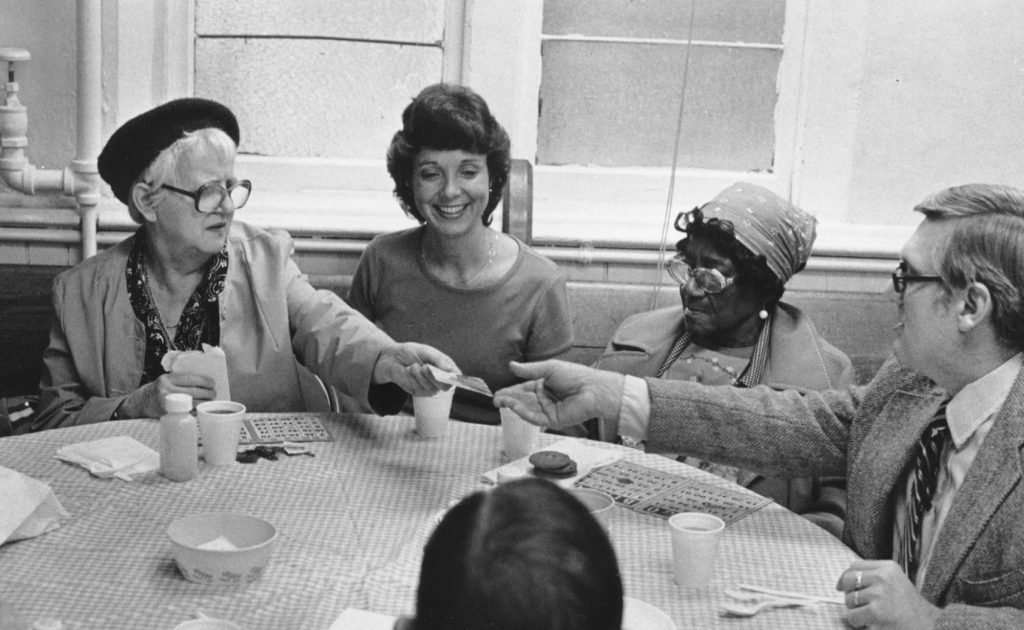 The day of Charles’s visit was different. Those same people, even the most indigent among them, were digging around in their purses and pockets for money to give away. I saw their instincts reverse: they emptied their pockets, instead of stuffing them full. In the end, the senior citizens left the room much happier than when they had entered. And so did I.

As I mulled it over, I could come up with only one reason: the joy of giving. For once the seniors had an opportunity to give, not receive. Are people somehow incomplete and unsatisfied unless they find a way to give to others? Watching my seniors, I could not avoid that conclusion. For most of them, living on small Social Security checks in public housing, society doesn’t offer much opportunity to give. To live always on the receiving end must foster a peculiar kind of shame. I saw before me the dramatic change that took place when they, too, had an opportunity to give.

An intriguing verse in the Book of Hebrews says, without much explanation, “Do not forget to entertain strangers, for by so doing some people have entertained angels without knowing it.” Who knows, we might have entertained five angels in the basement of LaSalle Street Church that day. They left with full stomachs, and smiles on their faces. And they also helped 50 seniors learn about a joy they don’t get to experience much—the joy of giving. 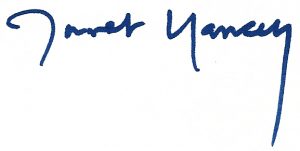 51 responses to “Thanks, Giving”